Supporter of the Year

The World Cancer Research Fund (WCRF UK) has announced that Peter Rigby, Informa’s CEO, is Supporter of the Quarter. 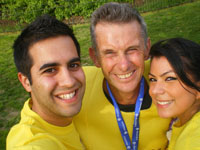 “Peter has worked tirelessly to encourage employees to raise money for WCRF UK since the partnership began in 2006. He is traditionally the banana in the annual London ‘Informa Go Bananas’ race, where he is chased by over 200 enthusiastic employees. Peter has also promoted the race to Informa's international offices, resulting in 1300 worldwide employees taking part in fun runs,” commented WCRF. Peter said, “I’ve really enjoyed supporting such a great cause and am delighted with the difference Informa has been able to make.”

“Informa has raised £280,000 for WCRF UK so we’d like to say a big thank you to Peter for all his hard work and dedication,” added the charity. to read more about this story click here...

The next banana race will be on 14 April 2011.  All runners, supporters and donations much appreciated.