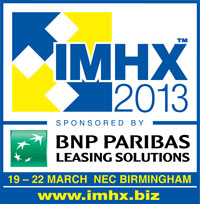 The logistics industry's flagship event, which took place from 19-22 March across four halls of the NEC, attracted not only the highest ever number of exhibitors - 412 - but also a record 19,526 visitors. Rob Fisher, Director of the Materials Handling Group of organiser, Informa, said, "We're absolutely delighted that we have delivered a record number of visitors at IMHX 2013. Equally as important, the feedback we've had from exhibitors shows that the quality of the visitor profile is excellent, resulting in a large volume of high-quality leads from senior people. We worked very hard in the run-up to the show to ensure this level of visitor quality and, for their part, our exhibitors put on a fantastic show for them."

The show's co-organiser with Informa, the British Industrial Truck Association (BITA), was equally delighted with the exhibition. James Clark, Secretary General of BITA, commented, "Many BITA members have said that they have enjoyed many serious and positive discussions over the four days of the show. Visitors have been upbeat about business prospects and are ready to re-invest. It was a real bonus to see so many young apprentices at the show - after all, they are the future of our industry."

Exhibitors buoyant
IMHX 2013 exhibitors were delighted with the volume of visitors and the quality of the leads they achieved. Paul Watson, General Sales Manager for Doosan Industrial Vehicles, said, "Doosan had an excellent show. We had one of the biggest and most impressive stands with a huge range of products and we believe that it was well worth our investment."

Paula Ovaskainen, Marketing Manager for Cimcorp, agreed: "Our stand at IMHX 2013 was larger than we had ever taken before at this show so that we could install a live demo of our 3D Shuttle robotic handling system, which literally stopped visitors in their tracks. The quantity and quality of the enquiries we received have made our investment very worthwhile."

Supersonic Bloodhound wows visitors
Sponsored by BNP Paribas Leasing Solutions, IMHX 2013 was opened by world land speed record breaker, Richard Noble OBE, who is Project Director for the latest record-attempting vehicle, Bloodhound SSC (SuperSonic Car). The 14m-long, jet- and rocket-powered car was displayed throughout IMHX in the show's Skills & Apprenticeships Zone and Richard gave a fascinating presentation to update visitors with the latest news about the car, which will attempt to pass the 1000mph mark. A sponsor of Bloodhound - which will make its first high-speed runs in the Hakskeen Pan, South Africa, towards the end of this year - is IMHX exhibitor, Linde Material Handling UK, which has been helping the Bloodhound team to load and unload the show car as it travels around the UK.

About IMHX
IMHX is jointly owned by Informa Exhibitions and the British Industrial Truck Association (BITA).

Held once every three years, IMHX is one of the major European shows and, with some ten per cent of visitors coming to the exhibition from overseas, is worthy of its international title and status. IMHX 2013 attracted 412 exhibitors and 19,526 visitors from virtually every industry sector including logistics, materials handling, transportation, food and drink production, retailing, pharmaceuticals, automotive, manufacturing, engineering and government. IMHX 2016 will be held on 13-16 September in halls 9 to 12 of the NEC in Birmingham.