Mobile data connections and services are growing strongly in Africa, but the continent continues to lag behind most of the rest of the world in terms of high-speed broadband connectivity, according to new research by Informa's global analyst firm Ovum. 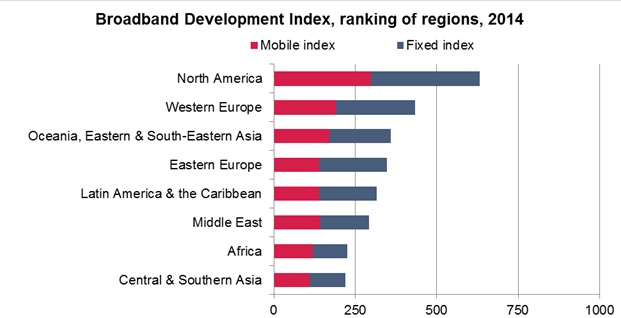 “Despite the growth in mobile data connectivity on the continent,” says Reed, “Africa is ranked second-to-last among world regions in terms of its broadband development.” According to Ovum’s Broadband Development Index*, a new research service that tracks the take-up of high-speed fixed and mobile broadband services in 191 countries (see figure), Africa has a Broadband Development Index score of 226 out of 1,000 for 2014, just ahead of Central & Southern Asia (219 out of 1,000), but a long way behind the leading regions, which are North America (633) and Western Europe (433).

Within sub-Saharan Africa, and taking into account only those countries with a population of more than three million, South Africa, Kenya, Zimbabwe, Uganda and Nigeria have the most advanced broadband markets, with 2014 Broadband Development Index scores of 262, 244, 241, 227 and 227 (both Uganda and Nigeria score 227) out of 1,000 respectively. However, South Africa ranks only 103rd out of the 191 countries worldwide tracked by the Broadband Development Index in 2014, and African countries account for eight out of the ten lowest-ranked countries in the Index in 2014.

“Ovum’s data shows that despite the remarkable advances made by Africa’s telecoms sector, the continent remains behind most of the rest of the world in terms of its adoption of fast broadband services. Bridging that digital divide should be a high priority for African governments, regulators and the industry, because of the economic, social and commercial benefits that it could bring,” concludes Reed.

* Broadband Development Index
In the Broadband Development Index countries score points for connecting people to basic fixed and mobile networks. They score higher points for standard fixed and mobile broadband connections. But the highest scores are for connecting people to fiber, VDSL and DOCSIS 3.0 on the fixed side and to LTE networks in mobile. As such, the Index should be used as a tool for understanding the speed of broadband and fast-broadband adoption in different countries and regions across the world. The numbers in the Index are taken from Ovum’s two online interactive databases, the World Cellular Information Service and the World Broadband Information Service. The 2014 numbers are year-end forecasts based on actual connections as of June 30, 2014.

To arrange an interview with Matthew Reed, Thecla Mbongue or Richard Hurst all of whom will be at AfricaCom 2014 from 11–13 November or for further details regarding this release, please contact the Ovum press office on +44 (0) 20 7017 4994, or email pr@ovum.com.

Ovum is a leading global technology research and advisory firm. Through its 180 analysts worldwide, it offers expert analysis and strategic insight across the IT, telecoms, and media industries. Founded in 1985, Ovum has one of the most experienced analyst teams in the industry and is a respected source of guidance for technology business leaders, CIOs, vendors, service providers, and regulators looking for comprehensive, accurate, and insightful market data, research, and consulting. With 23 offices across six continents, Ovum offers a truly global perspective on technology and media markets and provides thousands of clients with insight including workflow tools, forecasts, surveys, market assessments, technology audits, and opinion. In 2012, Ovum was jointly named Global Analyst Firm of the Year by the IIAR.

Ovum is a division of Informa PLC, one of the leading business and academic publishing and event organizers globally, headquartered in London. Informa is quoted on the London Stock Exchange.